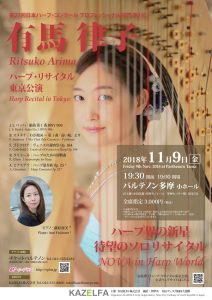 JPY 3,000（tax included） *Reserved seat only
※ No preschool children allowed
※ Performers and tracks may change without notice due to circumstances
※Except in the case of performance cancellation, refund / change of tickets after reservation / purchase
We do not accept cancellation.

About – Ritsuko Arima Harp Recital in Tokyo
Ritsuko Arima, a nova of Japan’s harp world, who won the 1st prize in the 27th Japan Harp Competition,
Professional Category in 2015, will hold a solo recital in November this year at Parthenon Tama, Tokyo, Japan.

Speaking of the harp recital at Parthenon Tama, it is still new to memory that the only recital performances in
Tokyo was held at this hall by Jana Boušková (Principal soloist of Czech Philharmonic Orchestra), the queen of
the harp world who came from the Czech Republic in June last year.

Harp music are widely popular, such as one of instruments in the full orchestra, or a concert of salon
music playing with flutes etc. but have little opportunities to listen individually as a solo instrument, The
solo recital by Boušková gave a huge response from various fields with brilliant sounds and emotional rich
musical expressions.

This year, Ritsuko Arima will appear on the same stage as Boušková. Arima was under Boušková’s
tutelage as during her enrollment at the Czech National Brno Philharmonic Academy from 2014 to 2016.

The greatest feature of this recital is the Harp Concerto by Argentine composer of the 20th century,
Alberto Evaristo Ginastera. Composed from 1956 and premiered by master harpist, Nicanor Zabaleta in
1965, this “Harp Concerto” has become an extremely important repertoire for every harpist in the world..
Ritsuko Arima also played this piece when she won the Japan Harp Competition in 2015. Ami Fujiwara
who instructed music to Ritsuko Arima at that time, will play the orchestra part by piano herself at this
recital.

“I am extremely pleased to be able to hold a solo recital at a lovely hall called Parthenon Tama this time.
Two years’ experience in Czech Republic as a disciple of Jana Boušková who I have adored since I was a
junior high school student makes my body full of love for Czech, gratefulness for my teacher Jana and
vigor of my own fresh sound.
I hope everyone enjoy the up-to-date sound of Ritsuko derived from the wonderful environment where I
belonged,Ritsuko Arima” Ritsuko Arima tells with enthusiasm for this recital.

In addition to Ginastera ‘s “Harp Concerto”, she will play “Vyšehrad” from Ma Vlast (My Country) by great
Czech composer Smetana, Suite No.1 by J.S. Bach, Carnival of Venice and other masterpieces, and will
speak about her own experience of study abroad in the Czech Republic, It is a program that can fully
enjoy the charm of harp with speech.

After winning numerous competitions and winning the 1st in the 27th Japan Harp Competition in the
professional category at 2015, she steadily secured high position as a professional harp player. As
Arima’s first solo recital in a full-scale concert hall, we cannot miss this opportunity. There is no doubt that
this harp recital will draw a lot of attention in this year’s classical music world.

Profile – Ritsuko Arima (Harp)
Born in 1993 in Tokyo, Japan. Started studying piano from the age of 3, and harp from the age of 8. Graduated from The Music High School Attached to the
Faculty of Music, Tokyo University of the Arts. Graduated from Tokyo University of the Arts in 2015.
From September 2014, enrolled membership at Czech National Brno Philharmonic Orchestra Academy until 2016. Studied harp with Noriko Sakomoto, Risako
Hayakawa, Mari Kimura and Jana Boušková. Studied piano with Ami Fujiwara and Akira Eguchi.